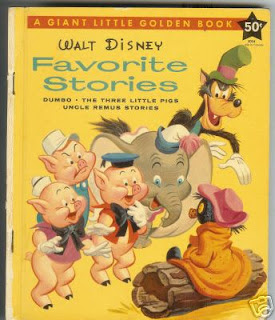 [Hogan’s Alley #16 will feature my article, “Who’s Afraid of the Song of the South?” about the making of Disney’s “Song of the South” and some oddities surrounding the film. However, there wasn’t room for everything including this oddity, a 1957 Disney Golden Book where on the cover the Three Little Pigs, Big Bad Wolf and Dumbo meet the infamous “tar baby” from the Uncle Remus stories. The term “tar baby” became controversial when it was later used as a racial slur. In some later Disney versions, the character became a white glue baby and in the Disney theme park ride, they have B’rer Rabbit trapped in honey instead of tar.]
Posted by Didier Ghez at 4:41 AM

Folks, I can't tell you how fantastic Jim's article is...it's such a privilege for Hogan's Alley to be able to publish it! Trust me, it will be a MAJOR eye-opener!