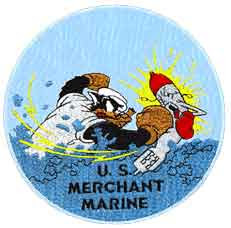 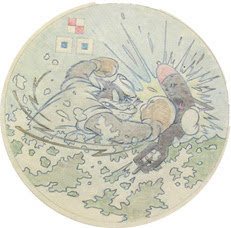 This just in from Jim Korkis:
[Purchase an authentic Disney military insignia emblem for less than six dollars (here).

At the same time, the official Merchant Marine service song was written at the United States Maritime Service Training Center, Sheepshead Bay, New York. The song, Heave Ho, was written by Jack Lawrence, one of the musicians in the base band.
The song ends, "We can cross any ocean, sail any river, give us the goods and we'll deliver, damn the submarine, we're the men of the Merchant Marine."The Walt Disney service patch and the Merchant Marine service song help tell part of the story of life at sea, the merchant marine defying the elements, and the actions of the enemy. Both remain a part of our country's proud military past and a memory of a merchant marine fleet that will never be seen again.

We shall also never see such a group of merchant seamen who sailed the Liberty Fleet in World War II. Often sailing with the merchant crews were 180,000 U.S. Navy Armed Guard.]
Posted by Didier Ghez at 12:41 AM

The patch is a modern remake of the World War 2, not what I nor any military insignia collector would call authentic. The authentic piece would be the World War 2 patch that is embroidered on felt.

The original art for this insignia resides in the collection of Tom Horvitz. He has quite a few pieces of Hank Porter art.

Just reread my post and I came off a little too harsh. The design is great and even on a new made patch it is worth the $6.00. Plus the proceeds go to a good cause. I just wanted to clarify that authentic to military collectors are for items worn or used during the time period.