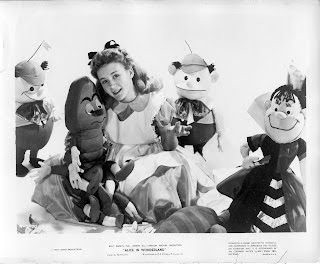 This just in from Don Brockway:

[I can't tell you who produced the dolls, since neither of the pictures I have offers up a credit for them.

What's interesting to note, however, is that the dolls are probablyarticulated to some degree, as evidenced by the different positions of Tweedle Dee and Tweedle Dum's heads/arms.

The least I can do is give you a better version of the picture you have aswell as the one that appeared in the NY Sunday News Magazine.

I'm not sure if I have these posted over at www.kathrynbeaumont.com, theunofficial site I've had up for a few years, but you're welcome to them!] 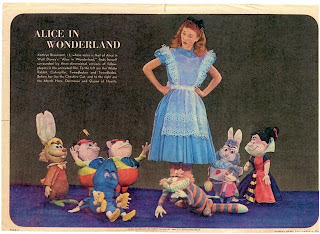 The reason I am so interested in those dolls is that I suspect they might have been produced by the Italian company Lars about which I am trying to write an article for Tomart's Disneyana Update. Did I say "Lars"? That company remains a mystery and I have started developing a new theory about it. Here is a note I posted on a blog two weeks ago and that did not get any answer. I was wondering if one of the readers of this blog could help.

[I need your help. I write articles about Vintage Disneyana for the US magazine Tomart's Disneyana Update. I have been researching for several years some fascinating Disney dolls that are credited in all Disney reference books to a mysterious Italian company supposedly called Lars.

I have never been able to find any information about Lars and the felt dolls look suspiciously like some that might have been produced by another Italian company... Lenci!

This weekend I stumbled upon a piece of information that might explain everything. It looks as if Lenci changed its named to Ars Lenci at some point. Depending on the way this was printed on the label, some people might have misinterpreted it and read Lars instead of Ars Lenci.

I was wondering if you or some of the readers of your blog could help me with at least three things:

- Would you have a photograph of one of the labels or stamps that feature the Ars Lenci logo? (By the way: when did the change in name happen?)

- The dolls credited to Lars are of much better quality and much more "on-model" than the Disney dolls released by Lenci in the 60s and that appear in one of the catalogs your feature on the site. Would you have a catalog that would help me find out if those better quality dolls were released in the '40s, '50s or '70s?

- You mention several books about Lenci: do you know if one of them features Disney dolls that might be relevant to my quest?

Thanks a million in advance for your feedback! Happy New Year.]

Hi, I don't know if the blog is still on, I found this page http://www.avventuralenci.it/avventura_Lenci/avventura_Walt_Disney.html
there's an interesting article on Wikipedia about Lenci

Thanks Paolo! Some great stuff on that page, which I had never seen. Really appreciated.