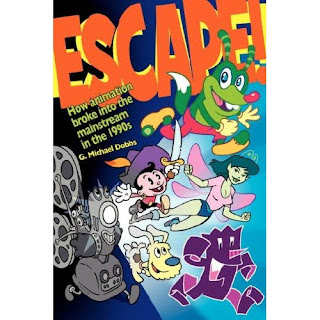 BearManor Media released just three months ago a new book about animation that definitely intrigued me: Escape by G. Michael Dobbs. I received my copy two days ago and needed to mention it on the blog. It does not contain enough about classical animation (read "Disney, Warner and Pixar") to make it on my top-10 list for this year, but it is definitely well written, by an author who knows his subject in-depth and wrote some of the best articles published in the magazines Animato! and Animation Planet.

In summary: not enough for Disney historians, quite a bit of fascinating and well-written material for readers who want to know a lot more about animation during the last 30 years.

Thanks fro the kind words about "Escape!"