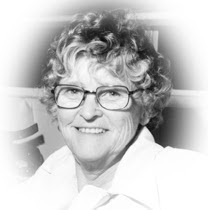 [As a child, Ruth Tompson lived right down the street from Disney Brothers Studio on Kingswell Avenue. She would hang around the Studio and saw Roy Disney filming cels. Along with other neighbor kids, she was in a group scene of at least one of the Alice Comedies. She remembers being paid a quarter and using it to buy some licorice candy. She was made a Disney Legend and that information is at this link.

From Daily Variety November 20, 2007, here is Tompson (strangely identified as Ruthie "Johnson") who is now ninety-seven years old talking about her time at Disney:

It was a different era when Johnson got her start in animation, when a "nosy kid," as she laughingly refers to herself, walking by the Walt Disney studio would be invited to come in and observe. As a child, Johnson was a neighbor of Walt Disney -- in fact, he used to film her and her friends playing for animation studies.

As a young adult, Johnson was working at the Burbank stables, where Disney and several of his animators came to learn to play polo. "All of a sudden this guy looks me in the eye and says, 'Ruthy Johnson, what are you doing here?'" Disney suggested that Johnson come work for him, and when she demurred, telling him that she couldn't draw, he insisted. "'You don't need to, we'll teach you,'" she recalls him telling her. "And if you do it, we'll give you the job, and if you don't, goodbye."

Johnson began night school to learn how to ink animation cels. "I didn't know how to draw, and they used these delicate little pens," Johnson explains, noting that if you did it wrong, the tip would break and splatter ink all over. The second night, the instructor tactfully suggested that Johnson switch to painting. She was called in to work on some Christmas shorts, and later she joined up full time, staying until forced into retirement in 1975.

"What impressed me when I first went to work at the studio (was) here I am a peon, basically, and the first thing they did was give me the script for 'Fantasia' and said, 'Take it home and read it and if you have any suggestions, please let us know,'" she recalls. "Fantasia" won an honorary Oscar in 1942 and is considered to be a groundbreaking film.

Employees also got paid for any gag that made it into a finished film. Johnson once suggested a different tune for a Pluto short, earning herself $5.

At lunch, rough cuts of animation were shown and bits that got laughs stayed in, while those that didn't were cut. Johnson remembers Disney overhearing her humming "Baby Mine" from "Dumbo" and deciding, on the basis of that, to keep the song. The song was nominated for an Oscar.

She went on to work in different departments, including scenery planning, before ending up as head of the department. Her less-than-stellar inking came back to haunt her when a batch of cels she'd proudly signed were thrown back at her when she criticized a newcomer's inking skills. She was one of the first women in the cinematographers society: She didn't actually handle a camera, but her job involved plotting camera moves. It was more than a year before she got paid the same as her male predecessor, thanks to an employee who complained on her behalf. "I got a big check after that," she smiles.]
Posted by Didier Ghez at 12:38 AM