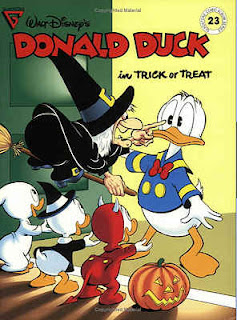 [Wednesday, October 10 was a fairly memorable day in Disney History it seems. Not only does it mark the 50th of Disney's Zorro, it also marks the 55th birthday of a terrific little short entitled "Trick or Treat".

Wade Sampson reminded me of that fact because he is writing a column on the short for Mouse Planet for October 31st. He gave me a brief preview of his column where he will explain how Warner Brothers was also able to make a short featuring Witch Hazel voiced by June Foray, the highly censored comic book adaptation by Carl Barks and the fact that Walt thought the dialog in the cartoon was "too fast" and he couldn't always understand what was being said. Despite their personal friendship, director Jack Hannah never saw the comic book adaptation by Carl Barks until decades after the short was produced and Barks never saw the animated cartoon until decades later.]