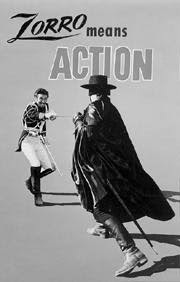 This just in from Jim Korkis:
[Out of the night,
when the full moon is bright,
comes the horseman known as Zorro.

This bold renegade
carves a Z with his blade,
a Z that stands for Zorro.

Fifty years ago, on October 10, 1957 the Disney Company produced another huge hit when Zorro premiered on American television. A good way of celebrating is by checking Bill Cotter's exhaustive website regarding the series. In addition, there are several books for the Disney Zorro fan including: The Zorro Television Companion, Chasing After Zorro, Guy Williams: The Man Behind the Mask and even Zorro by Alex Toth featuring the artist's comic book stories of Disney's masked hero for DELL comics.

A bit of trivia Britt Lomond, who ended up being the villain in the first thirteen half hour episodes, was actually Walt's choice for Don Diego/Zorro but others convinced Walt to go with Guy Williams. Williams was a favorite because he got advice from his friend, actor Strother Martin, on how to play the character with a "lighter" touch and to bobble his head and smile while he was fencing which is something real fencers never do.]