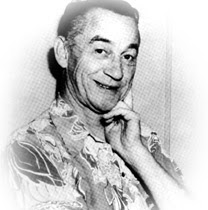 More from Jim Korkis:
[Re: Pinto Colvig comic strip artist
Around 1913/1914, Vance "Pinto" Colvig (the voice of Goofy in the Disney cartoons and also the first Bozo the Clown) worked as a newspaper cartoonist at the "San Francisco Bulletin" and later, the "Chronicle." He also dabbled in early animation, starting his own studio, Pinto Cartoon Comedies, which closed when his artists were drafted to serve in World War I.

I contacted Comic Strip historian Allan Holtz who has an excellent blog and he responded that "The only info I have for Colvig is a series titled "Life on the Radio Wave" in the Chronicle in 1922. That research was on the Chronicle microfilm, so at best I'd have a blurry photocopy example or two deep in the files somewhere. I haven't indexed the Bulletin past 1904 since they seemed to have gone with mostly syndicated material. Do you have any more detailed info? It's something I could look into further if there was anything interesting going on there."

Does anyone have any more information that might be able to help Allan do some further research? I wonder how Pinto's cartooning background influenced his work at Disney. Certainly his background as a circus clown influenced the early interpretation of Goofy and his musicial background provided just the right little addition to the "Who's Afraid of the Big Bad Wolf" tune.]
Posted by Didier Ghez at 1:55 AM

I have just a bit of info on Colvig during that era. The offices for the "Animated Cartoon and Film Corp." were on the 16th floor of the Hewes Building (at the southeast corner of Sixth and Market) in San Francisco. At the time he and his family (including his wife Margaret Bourke Colvig (nee Slavin) and son Vance, Jr.) were living at 235 Oak Street. A year or so later he had moved the family to 1385 Clay Street.