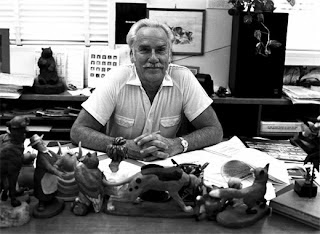 This sad news just in through Steve Hulett at The Animation Guild's blog:

[Over at Disney's this p.m., and I found out from Burny Mattinson that longtime Disney Animation veteran Art Stevens has passed away...

Art came to Disney's in 1940, and worked at the Mouse House his entire career. A longtime assistant for John Lounsberry, Art was elevated to feature director on The Rescuers when Lounsberry died. He ended up the lead director on The Fox and the Hound and finished his career with The Black Cauldron.

I worked with Art on Fox and the Hound, and thought he did a commendable job in pulling the film together. (During its making, half the animation crew departed, and there was some fierce infighting among the directors.) That the feature turned out as well as it did is much to Art's credit.

Born in 1915, Art was 92 when he died. It was good knowing you Arthur. I will always have fond memories of the time we worked together.]

An interview with Art Stevens conducted last year by Pete Docter is should appear in Walt's People - Volume 7.
Posted by Didier Ghez at 2:06 AM

Art Stevens was a great guy, and I had the pleasure of working with him, along with Julius Svendsen and Chuck Williams on "Wind Wagon Smith" back in the sixties. What an opportunity for a young kid who wanted to become an animator.

Is Chuck Williams still around ? I barely got to know him at Disney's in the late 80's . I was just starting out and he was getting ready to retire. He did some great key cleanup on King Triton in The Little Mermaid. I can't remember if he retired after Mermaid or if he stayed on for The Rescuer's Down Under ?
(I'll have to go look that up on the credits on IMDB)