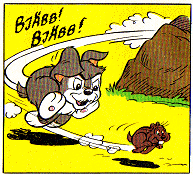 [At a Cartoon Arts Professional Society (CAPS) event in Los Angeles in the Eighties that I attended, cartoonist Roger Armstrong shared the following story about how he got the job of drawing the Scamp comic strip.

"Cartoonist Ed Nofziger called me one day and said 'They're looking for somebody to do Scamp and I told them if they ever wanted to have a real dog artist, you're it.' (Armstrong had been ghosting the Clifford McBride Napoleon comic strip featuring a huge dog and when he found the workload too difficult since he was doing another comic strip and comic book work, Nofziger took over the Napoleon comic strip for awhile.)

So I went in and talked to Don McLaughlin and he had these other fellows there and they sat around and looked at my samples. Finally, Don said, 'Can you draw Mickey Mouse?' I said, 'Absolutely not. I couldn't draw Mickey Mouse if my life depended on it.' There was a pause and then he said, 'Good, you're hired.' It was just a joke on his part, I guess."

Armstrong also shied away from drawing Donald Duck and Uncle Scrooge. "I couldn't draw them at all." Although Armstrong did draw some stories of Super Goof and the Beagle Boys. I was fortunate enough to buy two original Scamp daily strips and have Armstrong autograph them.

I believe he started on the strip around 1980 and continued until the strip was cancelled in 1988.]