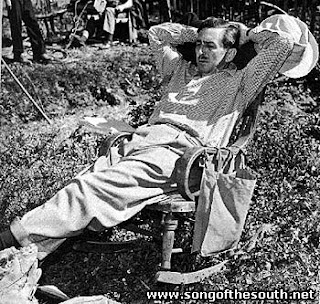 [By the way, on location in Arizona, Uncle Remus’ rocking chair was also used as Walt Disney’s “director’s chair." Across the back of the chair was written “Uncle Walt." Two great storytellers sharing the same chair. Just as President John F. Kennedy used a rocking chair for relief for his bad back so did Walt on location.

Here is another photo of Walt in the rocking chair from the great www.songofthesouth.net website. This is the earliest reference I know of Walt being called "Uncle Walt". Most folks believe it developed during his television years.]
Posted by Didier Ghez at 3:29 AM