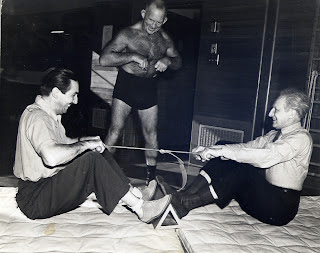 [This photo has appeared in several places but the gentleman standing over Walt usually never gets identified.

Walt had been a member of the Hollywood Athletic Club. One of the staff members was an ex-Olympic wrestler named Carl Johnson and Walt worked out regularly with him. When Carl heard that Walt was building a new studio, he suggested a gym so that the employees could keep in shape. Unfortunately, the plans had already been approved and the main building was already well under construction.

Something like that never stopped Walt so he decided to add a penthouse with a gym, locker room, steam room, barber shop and kitchen. For seven dollars a month, employees could use all the facilities, sun bathe and get private workouts from Carl Johnson. Carl's favorite workout used the old medicine ball. Carl developed arthritis and left the studio in 1949 and passed away in 1952. The penthouse became less of a gym and more a place to play ping-pong and poker. ] 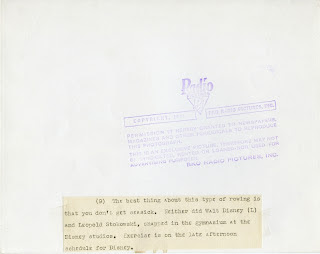