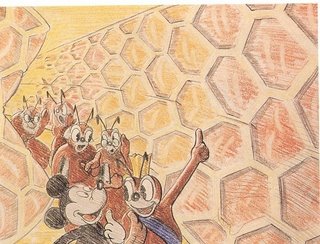 Here is the Freddy Moore related mystery I promised you last week.

I have been working recently on a short interview of Floyd Gottfredson by Christopher Finch and Linda Rosenkrantz for a future volume of Walt's People when I stumbled upon this story:

[Floyd Gottfredson: "This big model sheet up here was all made from drawings that [Fred] made for… now I don't know whether this was to be a feature or a featurette, called The Plight of the Bumblebee. Mickey had a bee that could buzz operatic numbers, he was a great virtuoso that way. But the bee had a weakness, he was a nectarholic: he'd get drunk on nectar, so Mickey had trouble controlling him this way. Fred got that picture about 90% animated, I understand, and Walt dumped it because he got scared of the alcoholic connotations. It was a little too early in the picture business."]

An unknown Mickey short with its animation almost completed by Freddy Moore!? I don't know about you but I find this bit of info pretty exciting. Would any of the readers of this blog have any knowledge of this project? Has anyone been lucky enough to see some of the sequences done for this short?

The illustration above is from the short Mickey and Claudius the Bee and, according to its caption in Charles Solomon's The Disney That Never Was, has been drawn by Harry Reeves. It might not be related at all to the project mentioned by Gottfredson.

Hans Perk said...
This comment has been removed by a blog administrator.
3:11 AM

It's true - see for instance here.
After a bit of cross-blog communication, we reached a concensus that the animation drawings from the last scene were done by Fred Moore (several keys are unmistakably his) but possibly finished by Cliff Nordberg...