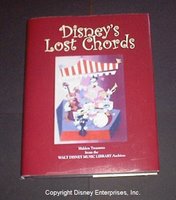 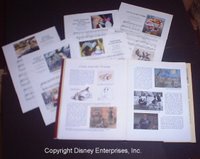 Along with Michael Barrier's biography of Walt and Jeff Kurtti's Walt Disney's Legends of Imagineering and the Genesis of the Disney Theme Parks, Disney's Lost Chords by Russell Schroeder is the book I am most looking forward to receive this year.

Russell was kind enough to send me the following information about the making of the book and how to get it:

[I first became aware of the quantity of songs that were written for Disney films in the late 1970s while I was working in an art department at Walt Disney World in Florida. In the department’s library was a book produced by the Walt Disney Music Company that listed the songs that were written for each film – including the ones that weren’t used! The unused songs were a part of the catalogue, because at the time they were written they had been copyrighted by the Studio’s music publishing division.

What I found were hundreds of songs that had been composed, and in most cases recorded for demonstration purposes or as accompaniment to initial storyboard visualizations, but for one reason or another had been deleted from the final film scores. Since I have enjoyed collecting Disney sheet music and records since my pre-teen years, I was intrigued by these “lost” musical numbers.

When I transferred to Disney’s Burbank, California studio in the 1990s, the opportunity arose in which I could satisfy that curiosity. Over a period of several years I was able to research these deleted songs in various files and storage areas maintained by the Walt Disney Music Library and the Walt Disney Music Company. Wanting to understand the songs within the context of the films for which they had been written, my research also included many enjoyable hours spent in the Walt Disney Archives and the Walt Disney Feature Animation Research Library identifying storyboard drawings and inspirational art, and reading memos and early script treatments.

My appreciation of the Disney songwriting process was enhanced by the abundance of musical creativity I had uncovered. But being a Disney fan, as well as an employee, I also realized that other fans of Disney music would enjoy discovering these compositions that had for the most part never been heard outside the hallways of the Disney Studio.

It wasn’t until my retirement several years ago that I was able to put the wealth of material I had collected into a format that could be shared by others. The result is the book Disney’s Lost Chords, licensed by the Walt Disney Music Company. It includes 77 songs that were written for films personally produced by Walt Disney, including Bambi, Cinderella, Alice in Wonderland, Mary Poppins, and The Jungle Book. As a special treat I have added some of the songs from three projects that were never produced: Rainbow Road to Oz, Chantecler, and Hansel and Gretel. Accompanying the full vocal/piano sheet music arrangements of the songs are over 225 photos and illustrations, many of them appearing in book form for the first time, along with a text giving background on the songs and the films.

Disney’s Lost Chords is a hard cover, dust jacketed, numbered limited edition of 1,000 copies, numbering 312 pages. It is scheduled to be available at the end of February, 2007 by mail order in the USA from

ORDERING INFORMATION (all dollar amounts are in U.S. currency)

SHIPPING AND HANDLING (per book)


International orders must use PayPal. PayPal address is pintopony66@yahoo.com
Countries not listed above, please inquire for shipping cost.]