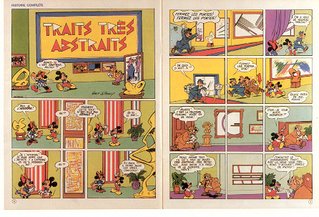 Speak of an amazing memory! I got a call on Friday from my friend Sébastien Durand about the post from last week concerning Are Myklebust's question about Bertrand Lavier's scupltures. Sébastien called me to say that he remembered having seen the comics that served as inspiration to Lavier. Called Traits Très Abstraits, it appeared in the French book by Michel Mandry about the 50 years of Le Journal de Mickey.

I am almost certain that this comics was created in the '70s, not in 1947 as claimed by Lavier and that it is of French origin. I will try to get more information about this in the next few days, though.
Posted by Didier Ghez at 12:43 AM