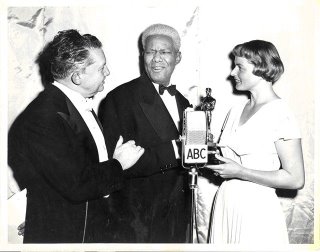 This just in from Jim Korkis (who is doing more for the blog these days than I am):

"Here is a photo of James Baskett receiving his honorary Academy Award for his portrayal of Uncle Remus. That is actress Ingrid Bergman and the then president of the Academy of Motion Picture Arts and Sciences Jean Hersholt. This picture will appear in an article I am currently finishing entitled Who's Afraid of the Song of the South? about the Disney film. Currently, the article is scheduled to appear in the sixteen issue of Hogan's Alley."
Posted by Didier Ghez at 1:20 AM