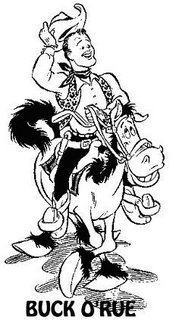 A large part of Walt's People - Volume 4 will be dedicated to the life and career at the Disney Studio of artist Dick Huemer. Jim Korkis was kind enough to recently send me material that relates to the career of Huemer after he left the Disney Studio:

"After having been laid-off by Disney's in 1948, Dick Huemer sought other ways to support his family. His projects included Animated Video Films (in partnership with Ace Gamer), a TV show starring Roy Williams (“The Big Mooseketeer” on the original Mickey Mouse Club), and a Western-style comic strip which he initially called Buck Carew.
He drew a few sample strips for his friend Art Lafave, who ran a newspaper feature syndicate in Cleveland. Lafave recommended having the strip drawn by a second party, so Dick selected Paul Murry because of the latter's facility with "wonderful hillbilly characters."
Murry proved adept at Western characters and was the artist on many of the Mickey Mouse Club serials in Walt Disney Comics and Stories.
Buck is less gullible and more resourceful than Al Capp's Li’l Abner. Lafave's one-man operation was not able to distribute Buck as widely as all had hoped. After being rehired by Disney in 1951 (ironically, the year the strip finally got published), Dick gradually lost interest in it. Paul Murry wrote the final episodes himself by the time the strip ended early in 1953."

If anyone reading this has access to the final weeks/months of the strip, please contact me, as a friend of mine is interested in getting access to those.
Posted by Didier Ghez at 12:01 AM