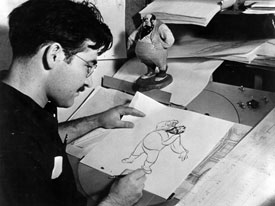 I was working this weekend on a marvelous interview of Frank Thomas by Christopher Finch and Linda Rosenkrantz for a future issue of Walt's People and particularly liked the following story about Tytla:

"I had a scene in Pinocchio. Bill Tytla was doing Stromboli, and in this scene Stromboli reached across the table and chucked Pinocchio under the chin. He was sitting on a little piece or bologna or something and fell over backwards. For some reason, some production problem, I had to do Pinocchio first, which was silly, because it was Stomboli's doing this that really motivated the action.

So I went down to Bill and I said, “How are you going to animate this?” Bill was pure emotion, wonderful guy, and his eyes would light up, he would tell me what Stromboli was like, what a big guy he was and how he'd move. He starts coming at me like this and backing me up across the room. I backed into the scene cabinet, half tipped the thing over and all the scenes start spilling out all over and Bill never stops.

So I go back and tell Milt, who was in the room next to me and Milt thinks this is the funniest thing he's ever heard, so he goes running into the room across the hall and told the story about when Frank went to see Bill Tytla and he gets to me backing into the cabinet and he starts waving his arms like this and he hits the lamp which was hanging down here and he knocked it down and it came crashing. He goes into the next room to tell them about it and he knocks into a storyboard and he knocks it off: it's hanging and it falls to the ground. Well when things fall, it fell flat like this, all the pushpins shoot straight out and then all the sketches… there's a slight pause and all the sketches just fall right down. Do you know how long it takes to get a storyboard just right and to have it all gone?

And Milt went to the next room, but by then word had gotten there and they said, “DON'T TELL THAT STORY!”
Posted by Didier Ghez at 12:38 PM