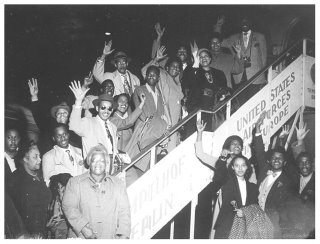 And here is Jim Korkis' last article of the week!

VOICES SINGING THE SONGS OF THE SOUTH

Currently I am working on an extensive article on Disney's SONG OF THE SOUTH for the magazine, Hogan's Alley, and here is a research vignette on some of the uncredited vocal work in that film:

Much of the uncredited singing was done by the Hall Johnson Choir, an African American choir led by Hall Johnson (a highly regarded African American choral director, composer, arranger and multi-instrumentalist) that performed to enthusiastic audiences in various prestigious New York venues. National recognition came when Johnson's choir performed under his direction in Marc Connelly's Broadway production of "Green Pastures" in 1930.

Five years later, Johnson took the choir to Hollywood, California to participate in the film version of "Green Pastures"(1936). Johnson and the choir remained in the Hollywood area and appeared in other films including "Hearts Divided" (1936), "Banjo On My Knee" (1936), "Lost Horizon" (1937), "Tales of Manhattan" (1942) and "Cabin In the Sky" (1943). Their performances also included the crows in Disney's "Dumbo" (1941) and "Song of the South" (1946). Johnson returned to New York in 1946 where he organized the Festival Negro Choir of New York. He was posthumously honored for his work in films by being elected to the Black Filmmakers Hall of Fame in 1975, five years after his death.

The DeCastro Sisters were a female singing group: they consisted of Peggy, Cherie, and Babette DeCastro. In 1945, the DeCastro family moved to the United States from Cuba and the sisters became protégées of Carmen Miranda. They had a style similar to the popular Andrews Sisters trio but with a Latin flavor. It was probably their connection with Miranda who had worked with Disney on "The Three Caballeros" that helped get them their first film work doing some singing background vocals for "Zip A Dee Do Dah" in "Song of the South".