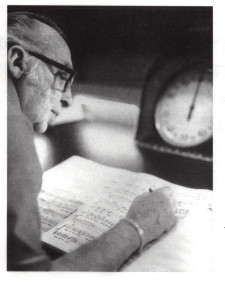 This weekend I was working on an interview of composer Buddy Baker by Jon Burlingame for Walt's People - Volume 5 and found this small story about fellow-composer Oliver Wallace that I thought you might enjoy:

"Ollie was a real character, a natural character. He would do funny things and he liked to play jokes on people. He had a great sense of humor. I remember one time I could hear him working, playing something over and over on the piano. I just copied it down and kept it for a couple of weeks. Ollie said to me one day, "You know, kid, if you get any ideas, let me hear them because I'm running out of ideas." So I waited until he said that to me the next time and I took this thing in and put it out there. I said, "Ollie, I came up with this. I thought it was okay." Then he played me some of the music. He got into it about six bars, then he turned around to me and said, "You son of a bitch!" [Laughter]"