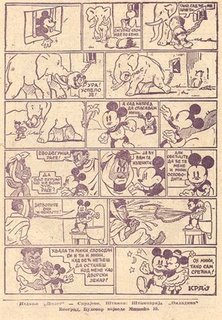 A few years ago I wrote "a history of Disney comics in former-Yugoslavia before WWII" for Tomart's Disneyana (issues 44 and 48). I have decided to start posting on this blog scans of all the locally created Serbian Disney stories that can be found in the Serbian comics magazines I own. I will post one each day for your enjoyment. One thing though: don't ask me to translate.

Here is a one page gag that was released in Mali Roman u Stripu number 1.