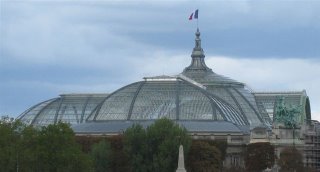 Major event. I have been aluding to it for weeks. Here are the details: A major exhibition of Disney art, at least 70% of it never seen before, is about to start in Paris.

IL ÉTAIT UNE FOIS WALT DISNEY, Aux sources de l'art des studios Disney will open at Galeries nationales du Grand Palais Paris on September 16, 2006 and will last until January 15, 2007. It will then travel to Museum of Modern Art Montreal where it will open on March 8, 2007 and close on June 24, 2007. There are rumors that it might then travel to other major museums around the world.

Make no mistake, this is a multi-million dollars exhibition taking place at a museum in Paris that is almost as important as Le Louvre. I do not recall that Disney art was ever exposed in such a presitigious venue in France in the past.

The basis for the concept of the exhibition is Robin Allan's book Disney and Europe that explores the European artists and European works that influenced Disney movies until The Jungle Book.

I will attend the inauguration on September 14th and (if photos are allowed) will provide a fully illustrated report about it the following week.

Andreas Deja, Charles Solomon, Robin Allan and Pierre Lambert will attend. Will any of the readers of the blog be there to? If so, please let me know!
Posted by Didier Ghez at 8:00 AM

I'll definitely be seeing it Montreal.

Too bad I don't have the resources to see it in Paris. :)