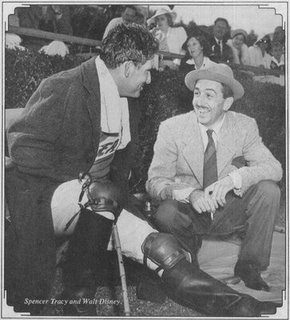 As promised, here is the second part in Jim Korkis great 5-part series about Walt and polo:

"The popularity of Mickey Mouse in the early Thirties was a mixed blessing for Walt Disney. The stress of running and expanding his studio and the demands being made in other areas as varied as merchandising and publicity as well as stress at home with his wife Lillian suffering through two miscarriages drove Walt to one of his infamous breakdowns.

Walt's doctor suggested that Mickey Mouse's father take up some form of exercise to help relieve the stress. Walt tried wrestling, boxing and golf but each attempt only frustrated him further rather than releasing the tension. Walt had always loved horses and he took up horseback riding and joined a local riding club.

Walt was a great multi-tasker and it occurred to him that he could combine his love of horseback riding with his desire to integrate with Hollywood society by taking up the then highly popular port of polo.

Originally, Walt enlisted Jack Cutting, Norm Ferguson, Les Clark, Dick Lundy, Gunther Lessing, Bill Cottrell and even his brother Roy to participate. They studied the book "As To Polo" by Cameron and had lessons and lectures by Gil Proctor, a polo expert. Eventually, they did riding practice in the San Fernando Valley from six in the morning until they had to report to work at the Disney Studio at eight.

Walt even built a polo cage at the studio so that during lunch breaks, the men could sit on a wooden horse and practice hitting the wooden ball into a goal. Finally, they started participating in matches with similarly inexperienced teams at the stadium on Riverside Drive. Walt and Roy would play regularly with their employees on Wednesday mornings and Saturday afternoons.
In addition, Walt and Roy joined the prestigious Riviera Club where such Hollywood luminaries as Spencer Tracy, Leslie Howard, Darryl Zanuck and others held court on the playing field. Roy Disney was a fair player but Walt was highly aggressive.

One of the major players in these matches was Will Rogers. Walt liked the folksy humorist and had been in discussions with him to star in Walt's first full length animated feature film, "Rip Van Winkle".

"Snow White" was not the first choice of a feature project for Walt. He had developed several possibilities including "Alice in Wonderland" featuring a live action Mary Pickford interacting with animated characters. When that project fell apart, Walt considered using the same concept but with Will Rogers as Rip Van Winkle interacting with animated characters.

Disney historian J.B. Kaufman discovered that group of Disney animators including Art Babbitt, Grim Natwick and Bill Tytla had been taken to Will Rogers' ranch in Santa Monica to make sketches of the comedian in action. Although this session might have been for another Disney cartoon that never featured Will Rogers.