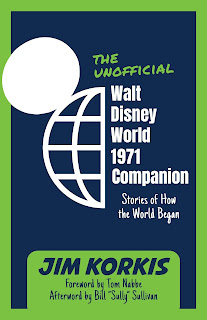 This just in from Theme Park Press about Jim Korkis' new book:

[How the Magic Was Born

Once upon a time, the swampy flatlands of central Florida were home to oranges, cattle, and alligators. Then a man came and said, "lo, there shall be a theme park." A few years later, swampland turned to fantasyland, as Walt Disney World arose. This is the story of how it happened.

Jim Korkis, the world's premiere Disney historian, weaves a compelling, organized tale from the thousands of details, reports, and eyewitness accounts—some of them never before in print— about the early days of the most magical place on earth. As with his companion book,
The Unofficial Disneyland 1955 Companion, Korkis delivers a top-down history, from the perspective of high-level Disney executives to that of front-line Disney cast members.

Korkis begins with the initial surveys of the Disney World site in 1958 and takes the story through 1972, telling the complete and definitive story of how the park was designed and built, and how it was run during its first year.

As Walt Disney stood on a swampy marsh in central Florida not long before his death in 1966, he did not see a wilderness, he saw a bright city of tomorrow, a towering castle, innovative hotels, and above all, families having fun in themed lands of wonder.

We know how the story turned out, but now you can stand alongside Walt and experience it all over again, from the very beginning.]