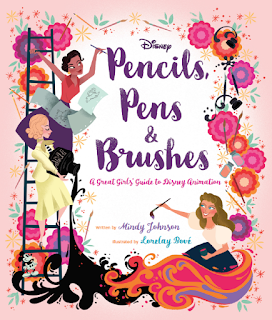 This just in from Mindy Johnson about her upcoming book Pencils, Pens & Brushes:


Based on Mindy's critically acclaimed Disney Editions title, Ink & Paint: The Women of Walt Disney's Animation, this nonfiction young-readers book is a fun and inspiring look at many of the amazing women who have worked at Disney Animation over the years. From Story Artists, to Animators, to Inkers and Painters, twenty remarkable women are explored from the earliest days of Disney animation - all with unique personalities and accomplishments, such as becoming a record-holding pilot, or designing Hollywood Monsters, or creating an international club for tall people!

This timeless treasure features the whimsical and inspiring illustrations of noted Disney artist Lorelay Bové, whose visual development and design artistry defined such animated classics as The Princess and the Frog, Prep & Landing, Tangled, Wreck-It Ralph, Big Hero 6 and Zootopia.