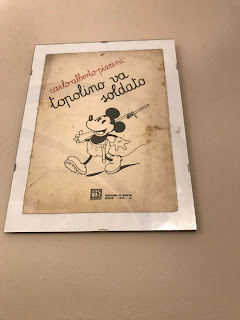 In a cafe in Lucca, my good friend Matteo Moriconi discovered this music sheet from 1933 owned by collector Piero Caniparoli. The music of "Topolino va soldato" was composed in 1933 by Carlo Alberto Pizzini.

According to a site about the composer, Walt Disney heard the music played in Rome on Saturday, July 20, 1935 during the special gala evening in his honor that he attended at the Roman Barberini film theater.

You can listen to a recording of the music at this link.