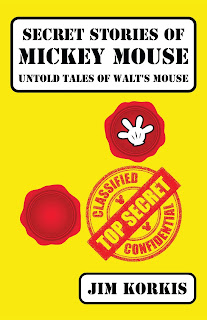 This just in from Theme Park Press about Jim Korkis' new book:

[Mickey Mouse! This Is Your Life...


In this one-of-a-kind "biography," Disney historian Jim Korkis chronicles the animated life of Mickey Mouse, from his birth on a train to proud parents Walt and Lillian Disney, to his upcoming 90th birthday bash. It's the full and complete story of Disney's forever-young mouse.

Most Disney fans nowadays experience Mickey as a costumed character in the theme parks. He has no TV show, no franchise of feature films. His heyday was before most of us were born. But Mickey has endured as a uniquely American symbol, and the best way to "meet" Mickey is not with an autograph book but with a fun look back at both his public and his private life.

In over 100 short chapters, Korkis covers every noteworthy event in the mouse’s life, including Mickey’s cartoon career, where he lives, whether he’s married, his suicide attempt, hidden Mickeys, the “men behind the mouse,” and much, much more.

No hype, no studio-approved narrative: it's all here, the good and the bad, the highs and the lows.