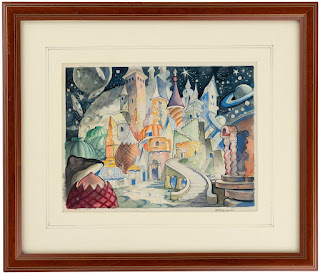 The new auction from Hake's contains a few marvelous items. My favorite is this specific piece of artwork. The caption (which I checked for accuracy before it was published) reads:

[15x17.75" frame contains mixed media concept original art for an unproduced Disney project adapting Rudolf Erich Raspe's Baron Munchausen character, specifically Jack Pearl's radio characterization. Art is by Bill Herwig, who joined the Disney studio in Jan. 1934. While all production documentation for this project appears to be lost, a 1935 memo from Disney's Story Research Department mentions a Baron Munchausen idea w/a list of projects in progress including a "Baron Mickey" listed w/story number "M 502." A few years earlier, Disney had begun looking into a way to splice animated sequences into other studios live action films, in a way to add to their exposure while at the same time minimizing the cost of producing a full length feature film on their own. MGM was approached about "The Adventures Of Munchausen" project, w/MGM's David O. Selznick noting that Disney's animation would be the perfect vehicle for conveying the Baron's tendency for telling tall tales. Sadly this project w/Disney's involvement never came to be. The film was eventually released as "Meet The Baron," a solely live action film starring Jack Pearl and Jimmy Durante. Offered here is a glimpse into what might have been. The wonderfully watercolored scene shows a magical kingdom, complete w/a multi-tiered castle (w/some roofs and walls made of Swiss cheese) set against a starry bkg. featuring many stars and a few ringed planets. Herwig has signed in pencil at lower right and art has been attractively matted to 8.25x11". Displays Exc. Superbly detailed original art from a lost Disney project. Rare.]
Posted by Didier Ghez at 6:12 AM