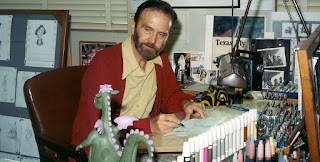 I spent the whole weekend working on several book projects and I thought it might be time to give you an update:

1. I was reviewing the galleys of the 5th volume of the They Drew As They Pleased book series (The Hidden Art of Disney's Early Renaissance) which focuses on the 1970s and early 1980s and on Ken Anderson and Mel Shaw in particular. They look absolutely stunning. The book covers a period which has seldom been discussed in Disney history books and contains huge amounts of artwork linked to The Jungle Book, The Aristocats, Robin Hood, The Rescuers and many, many more Disney projects, various of which never made it to the screen. The book will be released in August 2019.

2. Over the past few weeks, I also wrote the first drafts of the chapters which will appear in the 6th and final volume of the series (The Hidden Art of Disney's New Golden Age), which focuses on the 1990s until the Present and includes chapters about Joe Grant, Hans Bacher, Mike Gabriel and Mike Giaimo. That is the volume that will be released in 2020.

3. Finally, I am finalizing Walt's People - Volume 22, which will be released in February next year and which will contain some truly exceptional content, including a short autobiography of Ferdinand Horvath (!), the complete Disney-related letters of Eduardo Sola Franco, and an in-depth interview with Gary Goldman about his Disney career.

4. And Walt's People - Volume 23 is also making good progress and will include an in-depth interview with Fini Rudiger-Littlejohn and with Jeff Burke among other highlights...

On the other hand, two projects are on the back-burner right now: the diaries of Ward Kimball and the autobiography of Leo Salkin. I am still hopeful that those two books will make it in print some day.

There are also a few very cool surprises in store above and beyond the books that are already official, including a fascinating magazine, a series of monographs and a "lost" autobiography from an animator who worked at Disney in the 1930s. I will share news about those as soon as possible.