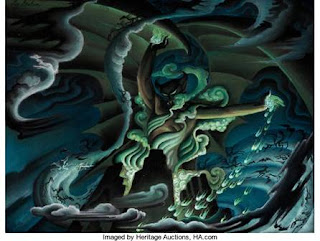 This just in from Heritage Auctions. I will post a lot more about this historic auction very soon.

DALLAS, Texas (June 5, 2017) – From animation drawings to production cels, concept art to storyboards, Heritage Auctions’ July 1 Animation Sale will offer one of the largest selections of artwork from the groundbreaking classic 1940 Walt Disney animated feature film Fantasia. No other piece highlights the rarity of this auction as well as Kay Nielsen’s epic “Night on Bald Mountain” Concept Painting (Walt Disney, 1940), which is expected to sell for $50,000.

“We’re highlighting this sale featuring ‘The Art of Fantasia,’” said Jim Lentz, Director of Animation at Heritage Auctions. “This is one of the largest collections of production artwork – cels, animation drawings, concept art, storyboards  – from this film ever in one auction. Over 60 pieces of original production art for this film are in this sale!”

In addition to the ample amount of Fantasia production art, pieces from Snow White and the Seven Dwarfs, Song of the South, Peter Pan, Robin Hood, Cinderella, Lady and the Tramp, Pinocchio as well as rare never-before-seen artwork from all the major animation studios, among others, will be presented in the July event.

Some of the earliest known art to come from the hand of Tim Burton will be offered, such as Stalk of the Celery Monster (est. $10,000) from Burton’s time at Cal Arts in 1979, and The Black Cauldron (Walt Disney, 1985), several concept art pieces from his time as an apprentice at Disney (est. $5,000).

Ken Anderson’s early Disneyland Haunted Mansion Studies (est. $5,000) is one of the most important lots Heritage Auctions has ever offered regarding Disneyland. Based on the Winchester Mystery House in San Jose California, The Haunted Mansion notes and plans are confined to a soft binder that Walt Disney and Ken Anderson loosely designed in 1957, 12 years before the ride officially opened.

“This auction will also feature the largest collection of Disneyland hand-silkscreened park entrance posters ever offered to the public,” Lentz said. “These are signed originals highlighted in several books celebrating the art of Disneyland.”

More than 1,000 rare and many never-before-seen lots from all major animation studios from some of the most important people in the history of animation also will be included in this sale.