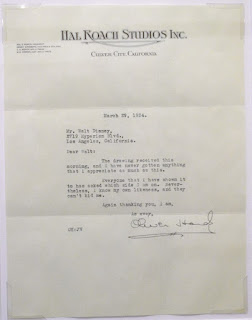 I just got the following note from the collector / historian who is selling the amazing drawing of the Pigs with Laurel and Hardy in the upcoming auction by Heritage Auctions:

[I have some info (and a special piece - a copy of an interesting letter - to go with it that is not in the catalog) on the Oliver Hardy painting in the Heritage Auctions (with two of the Three Little Pigs and an inscription from Walt--disguised as Hank Porter).  It is lot 95007.  One similar to this, but was to Laurel (not Oliver) sold for around $8900 in a Heritage Auction about a year ago (it was HEAVILY faded--mine is pristine). Also more info not in the catalog, the painting was obtained from the Disneyana Store at Disneyland back in the late 1970s. It was acquired by Disney from the Oliver Hardy estate.  They said in their Disneyana card that it had been displayed personally in Hardy's home and was one of his favorites (which the letter also mentions).] 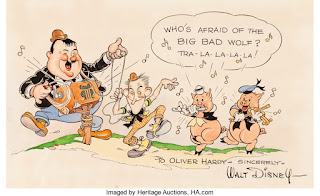 This is quite a find! Good luck to the Buyer!