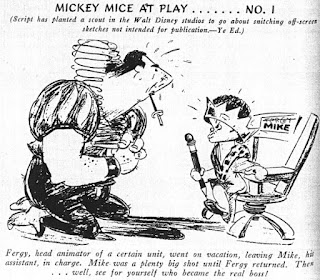 My good friend Paul Sorokowski spent some time last week researching old issues of the magazine Script. In a few of them he discovered some gag drawings created by Ward Kimball. This one was released in the January 27, 1940 issue of the magazine.

We have Norman Ferguson (Fergy) on the right, but who is his assistant "Mike"? I do not have the answer. Could anyone help?
Posted by Didier Ghez at 6:34 AM


And here is an article which was released in the magazine Click dated May 1939. Again, thanks to The Bulletin, we know that the artists featured here are:

It would have to be Mike Holoboff. He was an assistant director and Fergy was a director at the time. Oddly enough, there weren't any other "Mike"s there at the time -- unless you count "Mique" Nelson.

I came to the same conclusion, Joe, but only my second post obviously went through! LOL!A reference I did find in this very blog! Yes, I believe that it was Mike Holoboff!