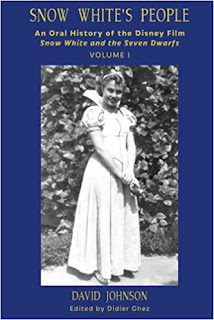 I am glad to announce that  the book Snow White's People: An Oral History of the Disney Film Snow White and the Seven Dwarfs (Volume 1) by David Johnson (which I spent the last few months editing) has been released this weekend. This is a two-part series and Theme Park Press should release the second volume towards the end of this year or early next year, when I finish editing the second half of the interviews.

This first volume contains interviews with the following people:

Fantastic! Thanks for this very interesting book.

Although I can't get this book when I haven't learned to buy things from Amazon, the interviews published in Animationartist.com are still a joy to read.

None of the interviews in this book have appeared on "animationartist.com".

What about Amazon don't you understand? Maybe someone here can help you.

Det ved jeg ikke... ops. Wrong language. Even if I could
find out on my own, maybe my real issue is to valuta US dollars
to Danish Crowns. But I would hardly discuss my
international problems in the Commentary section.
Purchasing my first item from eBay was my first challenge
in international shopping, and it was a Walt Disney biography
*An Intimate History...* on CD-rom, as it was very rare to find
in my country. Only got it because Michael Barrier and Hans Perk blogged about it, so I wanted to try it out on my old Windows XP
laptop.

But the Grim Natwick- and Wilfred Jackson interview do exist in that website. I'm sure of it