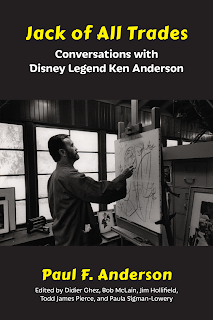 I just received my own copy of Paul F. Anderson's new book and love it. As always, Bob McLain from Theme Park Press has done a great job.

Here is the foreword I wrote for the book:

[Ken Anderson’s flurry of inked lines always fascinated me. This is probably why he has remained my favorite Disney artist throughout the years. That and the fact that he designed the characters of all the Disney features that I grew up with: from The Jungle Book, to The Aristocats, Robin Hood and The Rescuers. Ever since I could afford it I decided to collect his original drawings. I never regretted it: looking at them I feel closer to Disney’s creative process than with any other piece of Disney artwork. In other words, I fell in love at a very young age with Ken Anderson’s talent.

Which is why, when I launched the book series Walt’s People, back in 2004, I knew that the first volume needed to contain at least one interview with Ken. And I knew who to talk to, of course: my good friend and fellow Disney historian: Paul F. Anderson.

In the late 1980s, Paul had struck a friendship with Ken, who came to consider him as his adopted son. Helped by this friendship and motivated by his deep interest in Disney history, Paul decided to conduct a long oral history with Walt’s “jack-of-all-trades.” Twenty-one tapes later, in 1993, the oral history was abruptly interrupted when Ken passed away.

I had always dreamed of reading these interviews and of seeing them released in one single place, in book form.

Thanks to the efforts of transcribers Kevin Carpenter, Carol Cotter, Ryan Ehrfurt, Skye Lobell, James Marks, David Skipper, and Julie Svendsen, as well as to the work of my co-editors James Hollifield, Todd James Pierce, and Paula Sigman-Lowery, I am glad to finally see this long-time goal become reality.

You will notice that tape 9 is missing. Despite our best efforts we were unable to locate it. If and when we do so, its content will be released in a future volume of Walt’s People. In the meantime, we hope you will enjoy the fascinating life and time of Walt’s “Jack-of-all-trades,” Disney Legend Ken Anderson.

Hope you find Tape 9 of the Ken Anderson Oral History someday. The foreword makes me wanna read the whole thing, but have only the section featured in Walt's People Vol 1 to enjoy and write from. Wish the same thing about Joe Grant Oral History conducted by Charles Solomon. He's an inspiration to me