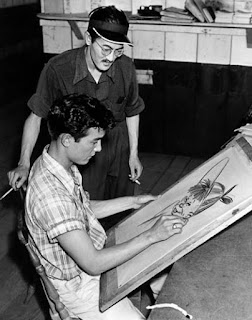 I have been working recently on the diaries of Ward Kimball and here is a short intoduction I wrote about another great American of Japanese descent, Chris Ishii:


On November 29, Ward got a new assistant, Chris Ishii. Ishii, along with Tom Okamoto, Masao Kawagushi, and James Tanaka, was part of a handful of Nisei who worked for the Disney Studio at the time.
Born on August 11, 1919 in Fresno California, after high school Ishii decided to attend Chouinard because a family friend, Mr. Oka, knew Gyo Fujikawa, who taught at the school. He joined Chouinard in September 1936 and graduated four years later. Following graduation, thanks to the recommendation of Chouinard’s business manager, Vern Caldwell, Ishii was hired by Disney and worked on the tail end of Fantasia, The Reluctant Dragon, Dumbo, and some Donald Duck and Mickey Mouse shorts. He left Disney after the strike, and after Pearl Harbor was interned at the Santa Anita Assembly Center where he created a cartoon featuring a young Nisei boy, Li’l Neebo for the camp newspaper, the Pacemaker. When it became possible, Ishii joined the Army and worked for the Military Intelligence Service for three years in China, Burma, and India. After the war, Ishii returned to the Disney Studio for a year, then started his own studio, before finally turning to freelance work and moving to New York. He passed away on November 6, 2001 in Dobbs Ferry, NY.