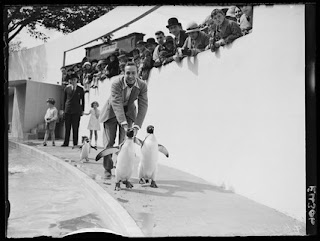 If you are reading this blog, you all know that this is a photo of Walt Disney during his visit to the London Zoo in 1935. If you read Disney's Grand Tour, you also know that in the background we can see publicist Francis Meynell with his son, Ben (left). Believe it or not, Michael Barrier and I a few days ago received an email from the little girl who holds Francis' other hand, Felicia Osiakovski-Richardson.

Felicia has authorized me to share her memories here:

[My parents were Dr. Stanislas and Joan Osiakovski and they ran The Bloomsbury Gallery in 34 Bloomsbury Street, London, which specialised in then unknown, artists whose works they exhibited. Within their wide circle of friends were Francis and Vera Meynell and their son, Ben, who was a little younger than I was, so that Ben and I grew up together both in London and in their beautiful Tudor house in Essex. When Walt Disney came to open the new Penguin Pond, it was plainly a good idea to have children about the place  which is where Ben and I came in. I remember parts of the day very well. We were told that we had to walk around the pond holding the Penguin’s flippers and I recall not being too keen on doing that and the surprise when I touched the Penguin as it did not feel as I had expected it would! I remember that Walt Disney was very kind and friendly towards us and that we were rather awed by the whole occasion as you might imagine. We were taken to the cinema the next day, I recall, to see ourselves on Pathe News in glorious black and white and we were thrilled to bits!]
Posted by Didier Ghez at 12:02 AM

That is a great blogpost! Did she recognise herself in the photo? Was that how she emailed you and Barrier?