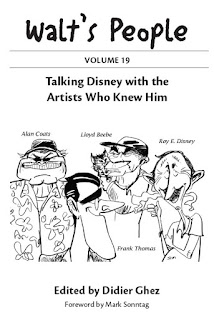 I have good news! Walt's People - Volume 19 was finally released this week.

This is really an exceptional addition to the series. Some of the best pieces in the volume include: a short autobiography of Don Graham, the letters that Disney publicist Janet Martin sent from Latin America while traveling with "El Grupo" in 1941, a long and fascinating interview with "True-Life Adventures" cinematographer Lloyd Beebe, and an in-depth interview with Alan Coats.