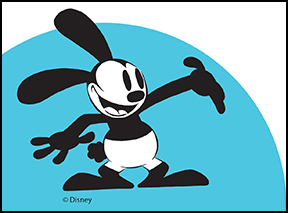 This upcoming book has just been announced by David Bossert on his web site. Can't wait!

The Search For The Lost Cartoons

By David A. Bossert

Oswald the Lucky Rabbit: The Search for the Lost Cartoons is an in-depth look at the origins of the Disney Brothers Cartoon Studio first major animation success in 1927, Oswald the Lucky Rabbit. The latest book from author David Bossert will explore the importance of this character from the rejection of the first Oswald short, Poor Papa, to the well-received second short, Trolley Troubles, to losing the rights to the character all together. This book will cover the definitive history of all twenty-six Walt Disney directed Oswald cartoons.

Oswald the Lucky Rabbit is a seminal part of the early Walt Disney Company history. Without the Disney Bros. losing the rights to Oswald, there may very well never have been a Mickey Mouse created. This new book will track the history of Oswald using rare, never before seen, surviving documentation; letters between Walt Disney and his brother Roy O.; early photos from the Kingswell Road and Hyperion Studio facilities; the film shorts; the repatriation of Oswald to Disney from Universal in 2005; and of course the Sportscaster Al Michaels connection.

This compelling, profusely illustrated volume is targeted to Disney animation aficionados and fans alike with an introduction by author and Disney historian J.B. Kaufman and archival editing by David Gerstein. It is the definitive Oswald the Lucky Rabbit reference for libraries, film schools, and anyone with an interest in the silent film era of early Hollywood and the animation film industry. This newest book by Bossert will coincide with the 90th Anniversary of Oswald and releases in the summer of 2017.]

But will Epic Mickey be talked about? Because that is a major contributing factor that got a lot of people to learn about Oswald in the first place.

Hope I get to see Sleigh Bells when it was discovered last year, as it was considered lost for about 80 years.