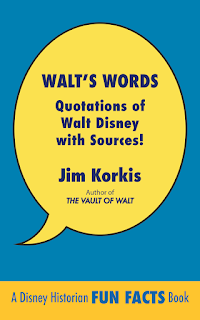 I have now received this book and I LOVE it. This is an extremely important reference volume. Finally a book full of "real" Walt quotes and not invented ones. (Of course some of the quotes come from articles that Walt only signed - but as long as he allowed for his name to be featured at the end of an article, even if an article was not actually written by him the words became his.) Finally a book in which Jim lists his sources carefully.