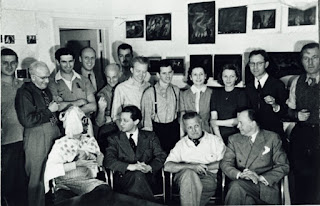 What am I working on these days? Here is a quick summary:

1. They Drew As They Pleased - The Hidden Art of Disney's Late Golden Age

The third volume in the They Drew As They Pleased book series focuses on the artists from the Story Research and Character Model Departments: Eduardo Sola Franco, Johnny Walbridge, Jack Miller, Campbell Grant, James Bodrero, and Martin Provensen.

The text is now finalized and all the illustrations approved by Disney. I will see the first layouts in November. Exciting! This will be a huge volume (248 pages long vs. the usual 208).

The manuscript has been finalized and sent to the contributors for comments. If all goes well it will be released before the end of the year.

3. The Wilfred Jackson correspondence and diaries

As you know, I helped historian Ross Care put together a book which, among its exciting content, includes Wilfred Jackson's diaries, and letters from the set of Song of the South. The book will be released in December this year.

I also had the pleasure of editing the interviews with artists who worked on Snow White and the Seven Dwarfs by David Johnson. Those will be released in two separate volumes, the first one of which should be released this year.

The volume will focus on the 1950s and 1960s. It will include artwork by (and chapters about) Lee Blair, Mary Blair, Tom Oreb, John Dunn, and Walt Peregoy. I have written the first drafts of the chapters about Lee Blair and Walt Peregoy and will be hard at work researching at the Disney Archives and Animation Research Library next month.

I am starting to work on the different chapters for that volume.

7. The autobiography of Leo Salkin

After 6 years of intense research, the lost autobiography of storyman Leo Salkin has been located by yours truly. It is a fascinating document and I am working with Leo's granddaughter to get it released next year in book form.

This is a long term project, but I am still working on it along with a few other Disney historians.

Wow – how do you do this with your regular job as well?! Keep up the great work – looking forward to all of these.

Many thanks! Am enjoying They Drew As They Pleased vol 2 at the moment, keep them coming.

Very impressive list of projects and I can not wait to see all of them, specially the Ward Kimball book. Congratulations, Didier, I am one of yours big fan.

I have to say that I will read them all but I am really looking forward to the Snow White Interviews.

This will be awesome.

Thanks again for all your hard work!