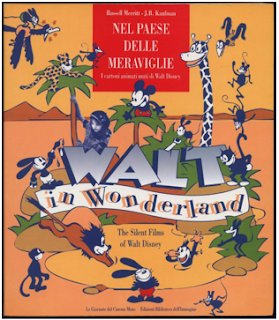 
[A copy of the bilingual Italian-English edition of Walt in Wonderland by Russell Merritt and J.B. Kaufman once owned by Ollie Johnston was sold during Howard Lowery's most recent auction ().

It was inscribed: "For my good pal, Ollie, Merry Christmas — and a Happy '94! With much affection, and all best wishes — Mark."

One can't help but wonder who the "Mark" in question is. The names of Mark Mayerson and Mark Sonntag come to mind. Walt in Wonderland (long out of print) was published in 1992. So that rules out Mark Twain or Marcus Aurelius, a man of many parts, who for all we know, may have been a fan of fumetti centuries before they were even invented.]

It was not me.

What about Marc Davis? Could he be considered, even if there's not a "k" in his name? He was alive at the time