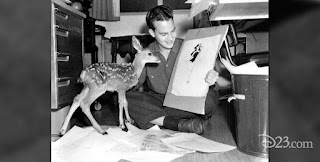 While researching the life of Bianca Majolie a few years back, I stumbled upon the following article that some of you might enjoy:


On July 28, 1938, this article appeared in the Lewiston Evening Journal:

“Last month we received a letter from Miss Bianca Majolie, Research Department, Walt Disney Productions, Hollywood, California, reading as follows:
‘We are at work on our third feature, Bambi, which deals with the life of a deer. As a setting for this subject, we are contemplating using New England states—specifically Maine—countryside.
‘Could you inform us where we can obtain photographs and colored slides of scenic backgrounds around that part of the country? Perhaps the travel bureaus, or the schools and colleges might have some material of that sort.
‘We will greatly appreciate your cooperation in this matter and feel that the publicity given your beautiful section of the country might help to compensate you for the trouble taken on our behalf.’
Recalling that Archer Grover, Deputy Commissioner of the State Department of Inland Fisheries and Game had recently shown us some beautiful color photographs (stills, not movies), we referred the letter to him and perhaps you may read in the papers that the Fish and Game Department not only sent photographs for backgrounds but also shipped two live deer. ‘Bambi,’ a ten-weeks-old fawn, accompanied by another fawn of the same age as a companion, to the Walt Disney Studio.
‘Bambi’ will be used as a model for the leading character in Walt Disney’s next full-length picture.
Both fawns are orphans, having been rescued by game wardens after their mothers had died. It is expected they will be returned to Maine after they have finished their movie ‘contract.’”