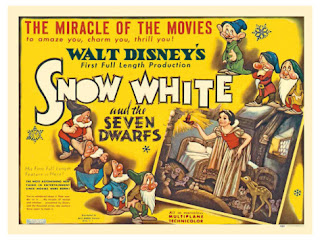 Time for a quick update about the projects I am currently working on:

1. You already know about the next volume of Walt's People (Volume 18) which will be released in just a few days.

2. And you have heard about They Drew As They Pleased - The Hidden Art of Disney's Musical Years which is scheduled for release on August 30, 2016.

3. I am currently helping David Johnson with the editing of two books similar to Walt's People which will collect the fascinating interviews he conducted about the making of Snow White and the Seven Dwarfs. The first one of those should be released in August or September. The second one at some point in 2017.

5. As for next year, aside from Walt's People - Volume 19 and the second volume of David Johnson's interviews, I am hoping to get some recently uncovered material from Leo Salkin (a short autobiography, a diary, etc.) in shape for publication.

6. Along with Paula Sigman-Lowery, Jim Hollifield, and Todd Pierce I am also trying to edit all the interviews that Paul F. Anderson conducted with Ken Anderson in order to release them in book form during 2017.

7. And finally, there is They Drew As They Pleased - The Hidden Art of Disney's Character Model Department, whose manuscript is now complete and which should see the light of day in September next year.

Am I safe in presuming the Ward Kimball diary is on the back burner? In your opinion should I just give up hope of ever seeing Amid's Kimball biography?

This is horrible for me because I´m still reading three books at one time right now!

OMC: We are still working hard on the Kimball diaries but that is a much longer term project considering how thick and complex to edit each volume is. I still have hope that Amid will release his manuscript in one form or other someday...

So fantastic. Looking forward to them all.