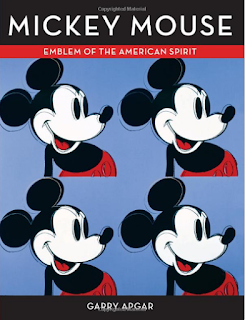 [My new book, Mickey Mouse: Emblem of theAmerican Spirit, published by the Walt Disney Family Foundation Press, was reviewed in the June 3rd issue of the Times Literary Supplement. The TLS is England’s, and America’s, oldest publication of its kind, and perhaps the classiest!

In the opening paragraphs, the reviewer had this to say:

“If optimism is the defining American virtue — and it had better be, you sometimes can’t help feeling — then this book’s central proposition, that the essence of the nation is more fully embodied in one animated rodent than all the flag-hoisters and touch-downers of nearly 250 swaggering years, makes perfect sense. It is hard to avoid a certain feeling of manifest destiny when you are reminded of just how popular Mickey Mouse along with his on-off consort Minnie and all their kith and kin were during the years flanking the Second World War.
“This engaging and tirelessly informative book is really two volumes in one handy slip-case … The first half narrates the professional life of Walt Disney, from the genesis of his cartooning career in Kansas City to a promising brief first stint in Hollywood, to the happy accident that made sense of it all: the evolution of Mickey from the pooled DNA of various ‘cute’ animals devised by Disney and others to star in the pioneering animated shorts …”

Further along into the review, the critic said: “You wouldn’t expect a book published by the Walt Disney Family Foundation to be overly critical of the maestro … But it is thorough and fine-grained, and fair on the events of Disney’s career.” I’ll take that as a compliment, both for me and the WDFF Press!

On another note: For those of you who live in Connecticut, the cable program “Focus on Connecticut” is scheduled to broadcast an interview with me over the weekend. The interview, which will air several times on Saturday and Sunday, will focus on my article in the April issue of Connecticut Magazine about Walt’s connections with the Nutmeg State. Todd James Pierce is quoted in the article about rumored plans for a Disney park in Connecticut. The interview will run several times over the weekend on News 12, which is part of the Cablevision network. Alas, the TLS review is not available online.]

In the quote reprinted here from the TLS review of "Mickey Mouse: Emblem of the American Spirit," the critic (a chap named Keith Miller) indicates that the book is a "slip-case" edition. Don't know what he was thinking. The book was nicely produced by Weldon Owen for the Walt Disney Family Foundation Press, but it ain't that fancy. Miller also said he looked in vain throughout the book for some mention of the dirty-linen side of Walt, things like the HUAC hearings after the war. But of course, that had nothing to do with Mickey. Critics, even in Jolly Olde England, must get their jollies any way they can, I suppose.