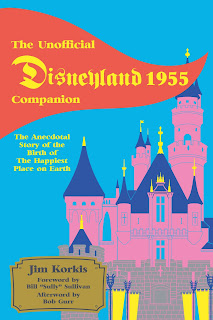 This just in from Bob McLain, owner of Theme Park Press about a few newly released books:

A Year in the Life of Disneyland

And what a year! In 1955, Walt Disney's dream of a theme park, the first of its kind in the world, came true. Disney historian Jim Korkis' entertaining tale of an American pop culture icon is power-packed with details, and the most thorough account of Disneyland's early days ever published.

As Walt Disney once said: "it takes people to make the dream a reality". Korkis never loses sight of the many people who built Disneyland, from famous Imagineers to obscure ticket takers. From their stories he crafts the epic adventure of how Walt conjured magic from an orange grove, with all the politics and the pixie dust, and the thrill of doing what no one had ever done before.

Just a few of the highlights from Disneyland 1955:

- The many little-known inspirations for Disneyland

- Comprehensive almanacs of Main Street and the four "lands" in the park, as they existed in 1955


THE VAULT OF WALT: VOLUME 5

Disney History at Its Best

No one knows Disney history, or tells it better, than Jim Korkis, and he's back with a new set of 20 stories from his Vault of Walt. Whether it's Disney films, Disney theme parks, or Walt himself, Jim's stories will charm and delight Disney fans of all ages.

The best-selling Vault of Walt series has brought serious, but fun, Disney history to tens of thousands of readers. Now in its fifth volume, the series features former Disney cast member and master storyteller Jim Korkis' home-spun, entertaining tales, from the early years of Walt Disney to the present.

Step inside the vault with Jim to hear about:

- How Barack Obama entered the Hall of Presidents

- Disney's original plans for Epcot's American Adventure, and why the Imagineers axed Will Rogers

Discover these and many other new tales of Disney history, as only Jim Korkis can tell them, in The Vault of Walt: Volume 5.

Then be sure to check out ALL the volumes in THE VAULT OF WALT! 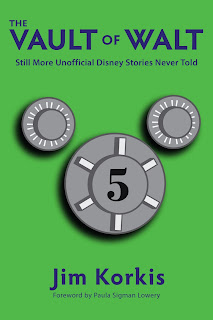 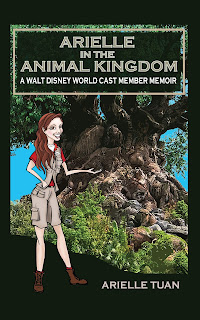 ARIELLE IN THE ANIMAL KINGDOM

Lions and Tigers and Cast Members

Armed with a freshly minted degree in anthropology, Arielle Tuan found her job prospects less than hoped for. Then she heard of the professional internships at Disney's Animal Kingdom for college graduates interested in conservation. Apply? Why not! And from there her adventure began...

Arielle soon found herself in possession of a "bug box" and told to educate guests about conservation and how they could help save the world — whether they wanted to hear it or not. After the bug boxes, she moved to Wilderness Explorer Stations (then known as Kids Clubs) and "animal positions", including one that featured the seldom cooperative Marley the Crocodile.

For shy, introverted Arielle, her months in the steaming "jungle" of the Animal Kingdom, surrounded by wild animals and sometimes even wilder guests and cast members, brought about a metamorphosis.

From the girl with the bug box that most guests ignored as they raced for the "thrill" rides every morning, Arielle found her groove as one of the park's Conservation Education Presenters. Her stories shed light on a whole other world at Disney's Animal Kingdom.

YOU'LL HAVE A WILD TIME! 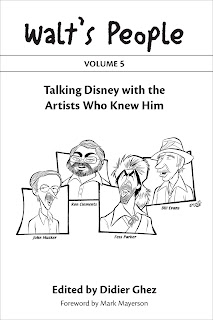 Disney History from the Source

The Walt's People series is an oral history of all things Disney, as told by the artists, animators, designers, engineers, and executives who made it happen, from the 1920s through the present.

Among the hundreds of stories in this volume:

- BILL WALSH takes stock of his long career with Disney, starting as a writer for the Mickey Mouse comic strip in 1943 and concluding as a producer for some of Disney's biggest films in the 1960s and early 1970s.

- FESS PARKER draws a bead on his complex relationship with Walt Disney, who was responsible for Parker's fame as Davy Crockett, but also for clipping Parker's career by not letting him take plum roles in non-Disney films.

- ALICE DAVIS recounts her romance with much older Disney artist Marc Davis, her fearless attitude toward Walt, and her work for Disney as a costume designer.

- JOHN MUSKER & RON CLEMENTS engage in a lively dialogue about their start at the Disney studio during a dark time, and how their success with films like The Little Mermaid and Aladdin ushered in a new golden age of Disney animation.

The entertaining, informative stories in every volume of Walt's People will please both Disney scholars and eager fans alike.