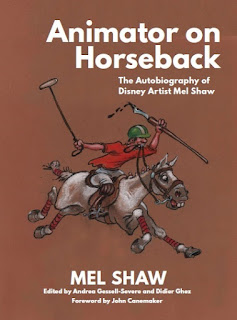 I was stuck in Buenos Aires over the weekend due to some air controllers' strike in Argentina, but I am now back in Miami.

The upside was that I was able to work on They Drew As They Pleased - Volume 3 and on Walt's People - Volume 18.

The first one of those books will be released in September 2017, the second much earlier: by the end of July 2016.

Closer still on the horizon are two books from Theme Park Press that I helped edit, which will be released by the end of this month:

Animator on Horseback, the autobiography of Mel Shaw (after 11 years of efforts to make this happen) and B-1st, a beautiful children's book written and designed by Woolie Reitherman and Retta Scott at the start of World War I, which will be published for the first time 75 years later!