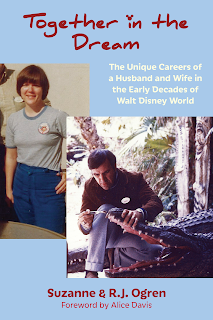 [The Ogren book (Together in the Dream: The Unique Careers of a Husband and Wife in the Early Decades of Walt Disney World) contains stuff that no one has read before, including interactions by R.J. Ogren (a Disney World artist) with Leota Toombs, Marc Davis, Alice Davis (who wrote the foreword), and others.

R.J. painted Animatronic figures and "plussed" attractions. Suzanne drove monorails, marched in parades, and entertained as Sleepy the dwarf. Together, the Ogrens brought their unique skills to Walt Disney World's Magic Kingdom during its formative years. This is their story.

R.J. and Suzanne were indeed "together in the dream": their adventures as husband-and-wife cast members spanned the backstage areas of iconic attractions, Main Street parades, and Disney executive offices. They worked with celebrities, Disney artists like Marc and Alice Davis, and the fun-loving, creative geniuses who called the "Animation Art Studio" home.

Among the stories the Ogrens tell:

- Working underwater at the old 20,000 Leagues attraction, aboard the pirate ship in Pirates of the Caribbean, and in the "jungle" of the Jungle Cruise

- How Disney trains its monorail drivers, and the surprisingly rigorous tests they must pass to qualify

- Life in the "Dwarf unit", the tight-knit group of cast members who perform as Snow White and the Seven Dwarfs in the Magic Kingdom

This is clearly a "must have" for Disney parks historians and enthusiasts.