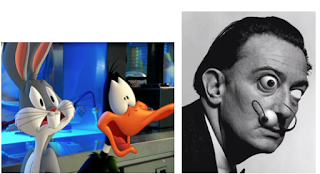 [Those Donald (and Daisy) Duck spoofs of Old Masters paintings recently discussed here bring to mind the two-minute animated sequence in the 2003 Warner Bros. feature film Looney Tunes: Back in Action, which can be viewed at this link.

The sequence involves Elmer Fudd, shotgun in hand, madly pursuing Daffy Duck and Bugs Bunny through the Louvre (Elmer must believe his constitutional right to bear arms applies in France as well as the U.S.). In the course of the chase the three characters enter into iconic masterpieces by Salvador Dalí, Edvard Munch (The Scream), Toulouse-Lautrec, and Seurat, none of which are actually at the Louvre.

In the midst of the action we glimpse Whistler's momma, chair-bound, hopping across one of the galleries. Whistler's Mother once was the only painting by an American in the world's most prestigious museum (in 1975 the Louvre acquired a landscape by the founder of the Hudson River School, Thomas Cole). In 1986, however, Whistler's Mother was transferred to the Musée d'Orsay, also in Paris, which showcases great mid- and late-19th-century art.

Some while back — in the 1970s or '80s, I think — an anonymous Disney artist created a pastiche of Whistler's famed composition with Minnie as the artist's mother (see below). Very much in the spirit of those Duck parodies from the late '30s ... though one can't help but wonder who "Minnie" was the mother of, and who it was that put her in a family way.

Whatever the answers to those portentous questions, one thing is certain. Mickey and Minnie's affection for Whistler's Mother goes way back — at least as far back as the May 1933 issue of the Mickey Mouse Magazine (also copied below), published one year before the painting was further immortalized on a U.S. commemorative postage stamp, on May 2, 1934.] 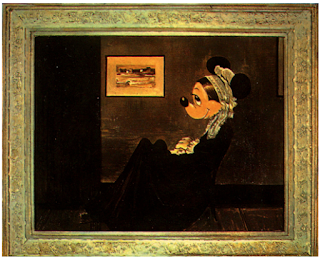 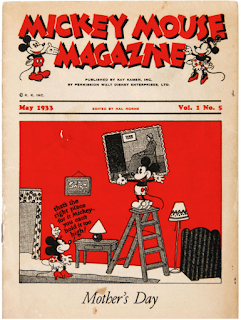