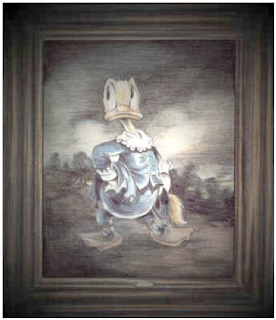 
[Regarding your August 5th post of that two-page spread of Old Masters pastiches featuring Donald Duck, “Speaking of Pictures,” which, by the way, appeared in the April 16, 1945 issue of Life magazine . . .

Los Angeles Times film critic Philip K. Scheuer, writing in the Times (April 2, 1939), said that Disney animators John Dunn, Phil Klein, and Ray Patin “started the thing as a gag during a ‘lull in our work.’” In the May 1945 issue of The Animator (published by the then New-York based Screen Cartoonists Guild), Dunn, Patin, and Klein were named as the “perpetrators and artists” of the project.

In an article titled “The Disney Gallery of Old Masters: Off-Hour Creations of a Famous Studio,” in the Chicago Tribune (June 10, 1945), Florabel Muir said that “It all started on a summer day back in 1938 when the boys may have been a bit fed up with the toll of daily chores.” Muir added that this “Disney art gallery of impish burlesques” began with a spoof of Gainsborough’s Blue Boy by Patin. She, too, named Dunn, Klein, and Patin as “the boys” who created the gallery, while crediting an “animator artist unidentified” with one work in the series, a parody of Rubens’s Portrait of a Lady.

Incidentally, these pictures were drawings, not paintings, as carelessly stated in the brief text that accompanied the images published in Life. The Animator said that they “were done in colored pencils to simulate oils and pastels." Muir reported that Patin used “a boxful of colored crayons made soft and pliable from a mixture of graphite — the medium in which all Disney animators work.”

There seems to have been thought, early on, of publishing the pastiches in book form. In his book The Disney That Never Was (1995), Charles Solomon described a conference on November 2, 1939 to discuss a planned-but-never-made cartoon short about Donald Duck as a guard in an art museum. During that meeting Walt Disney said:

“If we could get them reproduced in Life, it would do more good than putting them in a book. You get to three or four million people that way, then you put your book out afterward. And you could make reproductions — Courvoisier makes good reproductions. I’d like to have a set myself for a den or something. A lot of people would be crazy to get them. The ones that holler bloody murder, we don’t give a damn about them. The controversy is swell publicity. The public at large is going to get a big kick out of it.”

These pictures (the bulk of which are now in a private collection) were indeed published in Life, six years later, albeit not in color — but Courvoisier never marketed prints of the series.

I am Ray Patin's daughter, and I just discovered a copy of the original article in The Animator about the creation of the gallery. I will include this in the book I am writing about Growing Up Disney.

Renee: Could you please email me at didier.ghez@gmail.com? I would love to discuss your upcoming book with you, etc. Thanks in advance.