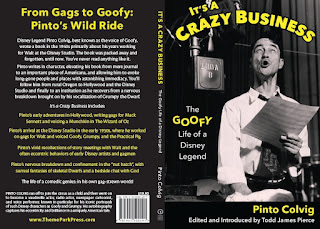 My good friend and the editor of the book, Todd James Pierce explained yersterday:

[A few years ago, while doing some archival work, I came across a full memoir written by Pinto Colvig, an early animator, film actor, and voice actor whose work goes back to the 1920s: he worked with Mack Sennett, Walt Disney, MGM, etc. More specifically, he worked on the Keystone Cops; he animated early black-and-white Mickey Mouse cartoons; he was the voice of two of the seven dwarfs; he was one musical voice for the Munchkins in the Wizard of Oz; and he was the original voice of Goofy. The book is, very likely, the earliest full-length memoir written by an animator or voice actor: Colvig wrote it in the early 1940s, yet it was never published. For the past year or so, I’ve worked with the SOHS to bring it into print. I penned a lengthy introduction about Colvig’s early life, drawing on his personal letters and other materials, as the book, itself, only covers his experience in Hollywood.]